I had a request a few days ago about the orbat's of the forces involved in our display game, and its also an opportunity to give some information on how the Battle Group rules were tweaked to fit in with the scenario we had arranged.
However, when I write that we did work on the adaptation, the vast majority of the research and work was undertaken by Nick T. I had a minor role and input with the rules, but the core of the display game came from Nick's experience in Germany in the mid 80's. Nato exercise -  Crossed Swords 1985.

Firstly, I need to explain what and where Gyros Teller is. It is in fact, not a small town in the North German Plain, in the BAOR deployment operating area, but a well known and liked Greek Kebab and chips dish, fondly remembered by all who served in BAOR. As a keen fan of the Kebab, my eyes are starting to mist over just thinking about it. The Belgian forces were 4 Leopard IA6's and 2 Scorpions. Regular forces which I believe would have been 3rd Lancers. The German forces were 3 M48G's and a platoon of infantry in 4 M113's, supported by a Gepard. German reservists. 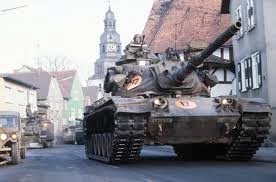 Whilst on exercise Crossed Swords in 1985, with the Belgians and British,  a Battalion force of German Reservist M48's were driven through the British deployment area. They were not part of the exercise, but are included in the Nato setup accordingly. 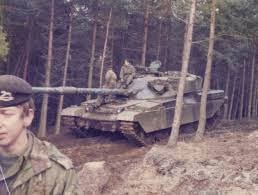 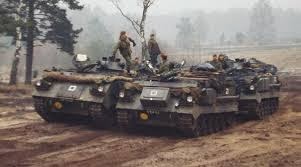 The infantry company were 1 Royal Scots operating in FV432's, with a company HQ and 3 platoons and a weapons platoon. A Milan compact turret and a Wombat, 2 FV432's with mortars, 2 Troops of 2 Strikers equiped with Milan, a Samaritan and 2 Scorpions were in support. The infantry had 2 Blowpipe launchers.

The battlegroup had a tactical HQ, POL lorries, an observer in a Ferret and a Centurion AVRE. A troop of 2 mobile Rapier launchers gave air defence cover. Artillery support was a battery of 2 Abbot SPG's. Air support consisted of a Army Gazelle observer, and 2 Army Lynx's with anti tank missiles. Liason with the Belgians and Germans was represented by helicopters, allowing contact and control with them. No liason officers at the HQ would mean no control of the Belgians and Germans. 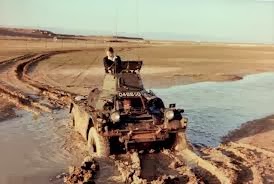 Rear area security was a Territorial Army platoon defending the bridge area. They were from 6th Airmobile Brigade, equipped with 4 LWB Landrovers and a troop of 2 Fox's from Royal Yeomanry. 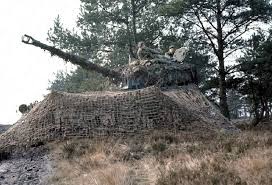 Pulling everything together as follows 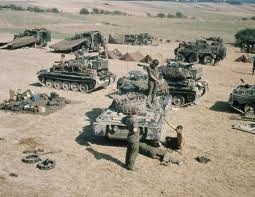 The Soviets were a Motorised Rifle Regiment battalion, supported by its parents Tank Regiment battalion. Modelwise this presented a problem in so far as this was a substantial amount of vehicles, 90+ , so some recycling of models would be required.

The Soviet advance to Gyros Teller would follow standard operating procedure for such an operation. There would be several thrusts/probes by the MRR towards the canal, parellal to the advance on Gyros Teller town. They would be tasked with securing a crossing of the canal, and would expect to be able to deal with any threat they came up against, either overwhelming the opposing forces or bypassing and isolating them and continuing on by other more sucessful advances.

Nato forces would be aware that rotary wing aircraft were operating in the general area, and these would be available to secure strategic points for the Soviets, in conjunction with their advance. This was part of the Soviet plan for Gyros Teller, though the presence of the 1 Royal Scots battlegroup was not known due to a failure in recconaisance. They had been unable to penetrate the Belgian forces in front of them, or the screen provided by the German reservists, either by recce troops of the MRR or airborne recce.

The Soviet attack would consist of 3 waves, lead by the recce troop. They would be supported by an Anti tank platoon, 2 fully kitted Mi24 Hinds, a mine clearing roller and a bridge layer. Coming on with the first wave would be the MRR battalion commander with support vehicles - counterbattery radar, and 1 SA13 launcher vehicles. Additional AAA came in the form of 2 Shilka's.

The MRR battalion comprised 2 companies of 18 BMP's and the HQ with its support. The BMP's were a mix of BMP1 and BMP2. The battalion HQ and support staff can be seen in the picture above, along with the Airborne liason helicopter.The Regiments recce troop of 2 BRDM's, 2 BMP2 and 2 BMP1, which would lead the attack. The recce troop would be approxiamately 15 km's in front of the main body, searching out the route of advance, identifying resistance hot spots and potential opportunities and problems. This they did, by drawing out the Germans behind the Belgians, who were withdrawing through them.

The supporting Tank battalion had 2 companies of T64 tanks and a battalion HQ with a total of 16 tanks. 6 T72's were used as replacements.

The Airborne assault was by a half company of Paratroopers  supported by a platoon of 2 ASU85's,  4 BMD's and 2 120mm mortars.

Putting it all together as follows

How does Battlegroup Kursk fit in with wargaming modern warfare, given that we were attempting a scenario from 1985? It was quite easy really, coming from a background of wargaming WW2. They were - for us - the best fit. The most important factor was the command and control element of BGK, that allows flexibility and the 'fog of war' to influence what you can do on the table.
In such a large game, the Nato forces had to follow a plan of action, which we had played out beforehand, integration of the 3 armies on the table, only possible by the presence of the liason officers at the Nato HQ set up near the bridge. The same was true for the Soviet forces as well, with a clear direction and approach for the 3 successive waves of forces.
What also helped was a comprehensive understanding of the operational procedures of the forces involved and how they would respond to changes to expected situations. Essentially, the Soviets would be 'doctrinaire' and follow procedure, not blindly, but would have set ways of dealing with the situations, whereas the Nato - especially 1 Royal Scots battlegroup, would be far more flexible. The difference due to training and tactical doctrine placing leadership and iniative down to a lower level than the Soviets. These elements are in BGK. There would be less command dice for the Soviets, but they would have the ability to move and fire by company and platoon.They would still be able to move and fire individually, but this would then affect their ability to control their large formations, which would effectively grind to a halt, whilst micromanagement of the battlefield tookover for the senior officers. Again this was a feature of BGK, but one which we tweaked to suit the scenario we were recreating.

With the emphasis on training and junior officer leadership, having restricted the Soviets, there was no need to modify any factors for the British, or indeed the Belgians and Germans. There were therefore more officers for the Nato forces than the Soviets, thus affecting the action point baseline score before adjustment by the dice. Also, the Nato force would have the ability to reroll a dice per turn, so long as the Brigade HQ was operational. This was available to the Soviets, but only once per game.
Communications were different, with better communications for Nato than Soviet,  but we did not go into jamming. Counterbattery fire was live, with counterbattery radar operating  through the game, the chances of being picked up and tracked to source significant if a second turn of fire was done. It was basically shoot and scoot.

The gun penetration tables, armour values, missiles and ranges were going to be different, but actually were transposed onto the BGK table, with the King Tiger being the baseline set to the Chieftain/T72. The ranges were extended due to improved optics and electronics. A important factor was the Improved Fire Control system that was used by the Brits in the Chieftains. This allowed the Brits to take advantage of the range increase of the guns, and closer to allow better control of targeting. Missiles were used, much more on the Soviet side, but a significant amount by the Brits. They had minimum ranges for engaging, which in game terms were 10 inches minimum. Technology for missiles meant that they would be guided onto target visualy, and there would therefore be an opportunity to suppress the firer in ambush fire, otherwise the missile could be flown onto target.

We used artillery in the game, but limited its effect. The principal reason for this was the fact that we did not have a 200li sack of cotton wool to dump on the table to simulate the effect of the Soviet artillery support that would be available. Part of the rationale behind this, was that what was availble was allocated to the attacking forces before hand and used on an ad hoc basis, not preplanned. Counterbattery as well as air assets would limit the amount of artillery support available due to effects detailed earlier. It could still be called down, but there were risks associated with it, as well as competing demands on it. The recce troop of the Soviets, as well as their Senior officers could generate calls for targeting, and Nato officers as well as recce elements could do the same. However game wise, it was a visual non starter.

How did the game play out with BGK,and the number of models etc involved. Firstly, Nick and myself had/have played a lot of large games using BGK and Kampfgruppe. We were familiar with the rule systems, and scale. Secondly, the tempo of the game was such that we slowed things down to allow conversation and interaction with the people who came to ask about the display and what we were doing. This meant that things/actions/reactions could be a little bit more considered, than trying to scrabble around the table and get everything done. Thirdly, although it was expected that 1 Royal Scots would die heroically retreating back to the canal only to find it held by the Soviet paratroopers, this wasn't the case. They managed to keep standing whilst being able to hold the Soviet assault waves off, forcing them to split their attack, and to commit piecemeal.

Overall, the game worked within the parameters we set it. BGK worked with the tweaks that we used to play it. Hopefully everyone enjoyed the display.

Thanks for your interest.

There are 2 excellent blogs out there that are worth mentioning, and to be honest , are really on the button with information, pictures and modelling.
http://coldwargamer.blogspot.co.uk/
and
http://coldwarhot.blogspot.co.uk/
An excellent source for orders of battle and how Soviet forces operate.
http://www.fas.org/irp/doddir/army/fm100-2-3.pdf

Posted by Corporal Schmitt at 10:12