﻿
Having read a lot of the background to Falaise, and the 'escape' of the German forces through the 'gap', I thought that it would be interesting to try to explore this further. Given my US bias, I thought that hanging around for several days with a US combat command would not make an interesting game. Likewise, roleplaying a French unit to see when it shot of in the direction of Paris - to liberate, would be equally boring. The grinding hard battle that was the closure of the Falaise Gap, was fought by the Polish, and to a certain extent the Canadians against desperate fanatical SS units - mainly 12th SS, and 1st SS Panzer Corps, holding the 'neck' of the noose. 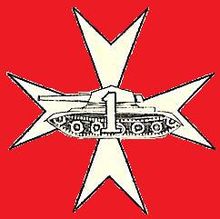 ﻿
Okay, apologies to the US, French and Brits, but the commitment of the Poles forced a tactical reaction by the Germans to commit elite forces - the SS to hold open the northern edge of the 'Gap', risking trapping those forces whilst allowing frontline German units to retire. The core of the support units/staff were mostly through when the battle reached its hiatus but not all. Lack of command coordination, ego's and strategic and tactical ineptitude almost made the sacrifice made by the Poles irrelevant. My game would include aircraft, though targeting would be random - the Poles would be equally liable to be rocketed as would the Germans.
The Germans would be deployed randomly along the escape route, which they would need to exit off the table via a ford over a small river. The Germans would get victory points for units able to escape - they would be able to make the Polish player take a damage chit, or give them one of their own damage chits caused by the Poles destroying German units. The Poles would deploy on one side of the table in any formation they wished, but before the random deployment of the Germans. This would show the unexpected revealing of the German column, but the Poles would move first. 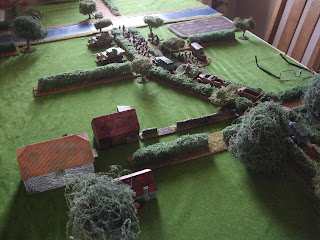 The Germans deployed alomg the entire length of the road, up to the ford. A battlegroup command and a pair of Panthers deployed off the road as there was no room on the road. There were 2 platoons of marching infantry, 2 Marders, 2 towed Paks - an 88mm and a 75mm, 2 lorry towed 105mm howitzers and various cars. 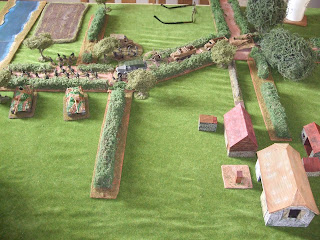 The Poles deployed on a hill rise - a troop of Shermans with a Firefly, and 2 armoured forward observers - an Air and Artillery observer, in an unarmed Sherman. 2 platoons of infantry, both sweeping along the river. The Poles were deployed with their tanks effectively away from the Panthers, but within sight of a pair of Marders. 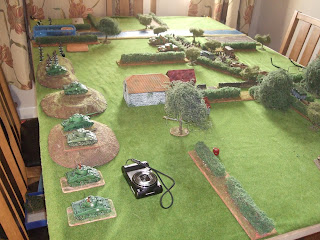 The observers were out on the right flank, not really able to observe that much, witht the Firefly next to them. This opened up the possibility of the Panthers taking out some of the Shermans and the Shermans/Firefly taking out the Marders. By the end of the first move,this is what had happened. However, the Polish infantry were exposed in the open to the Panthers, and then had to be relocated away from them, behind the hills and tank line or what remained of it. 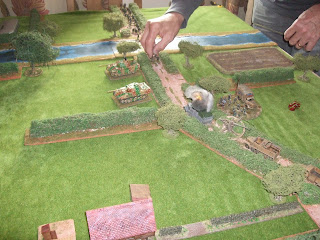 The Poles managed to seal the front of the column, but as stated earlier took casualties. 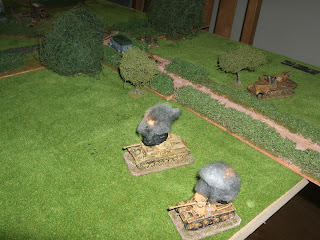 The Marders were quickly dispatched by the Firefly. 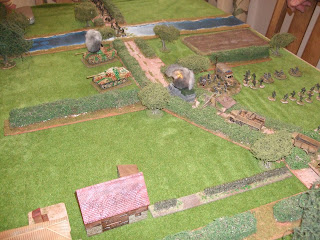 The German infantry are making a run for the ford behind cover, but a Panther succombed to a lucky shot from a Sherman. A towing 1/2 track for the 88mm got blown up, but managed to deploy before losing the tow. This though blocked the road for the rest of the column, forcing it off road to avoid. There were no recovery vehicles - must get hold of a Famo recovery track, or make one. 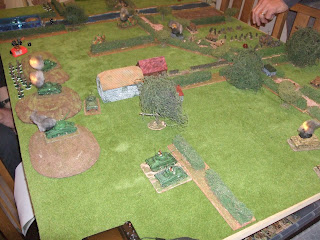 A look at the tradeoff so far, and the response of the Poles to the German resistance. 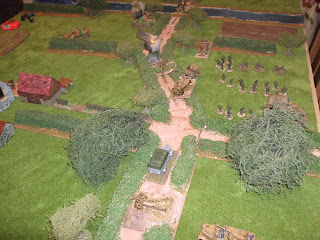 One of the howitzers deployed to have a go at the Sherman equipped observers. Though they didn't have a main gun, they had bow mounted mg's. Enough to suppress parts of the column and the gun. 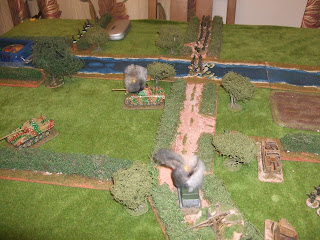 ﻿
The Germans are pushing infantry across the ford, and the 1/2 track is moving up, followed by a lorry. The remaining Panther is going on the attack, forcing the Poles away from the ford and into the farm complex. 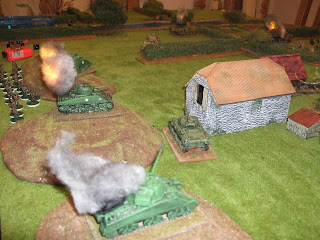 All that remains of the troop of tanks is a Sherman hiding behind the barn trying for a side shot of the Panther. 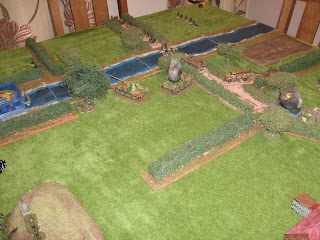 The Panther having scared off the main attack on the column, heads for the ford and to engage Polish infantry moving up to outflank the column and seize the ford. The Panther opens up with the mg's on the infantry creating mayhem. 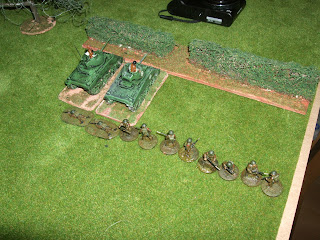 The observers, reinforced by a section of infantry move up on the end of the column 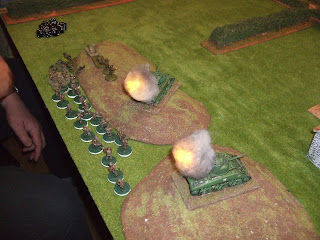 The Poles on the left have suffered a setback, and in the middle wait behind the hills. All told it is not a German victory, but a Polish loss, in that the column has forced its way across and the Poles can't stop it. Thanks to John ( Germans ) and Ian ( Poles ).
Part 2 will be the attack on the Poles at the Mace - the Maczuga ( in Polish ). The Poles will be in defensize positions against an assorted German force determined to remove them from across their line of retreat.

Posted by Corporal Schmitt at 08:10 No comments: