Gyros Teller visited the Tank Museum at Bovington courtesy of an invite from Battlegroup South, who organise a weekend show at the Tank Museum. We were placed in the foyer, just up from reception and the shop, near to the entrance to the main exhibition hall. We had a lot of space for the game and were able to set up a display board next to the table (2 metres by 6 metres) with military intelligence photo's from the period, providing part of the 'legend' for the game. This would be the fourth game in 2 years. 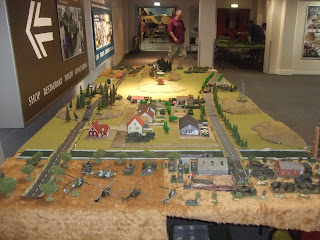 Set in Febuary 1986, the game would simulate an advance on Gyros Teller by 2 separate Soviet Warsaw Pact forces. They would push on via 2 roads to the town, separated by a Corps boundary, to secure bridges over the canal for further independant exploitation by their commands. The attack would be made into the 1st Belgian Corps area, to the south of 1st British Corps area. 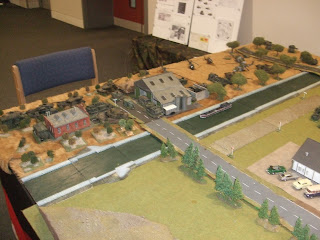 Historically, this was considered to be a very likely option for the Soviets should an attack be made over the IGB (Inner German Border), to exploit the relative weakness of the Belgians. Wargames and manoeuvres were tested to reinforce the Belgians with 4th Armoured Division, part of !st British Corps, and these were used to see how the redeployment of 1 Br Corps could be optimised, whilst 1 Be Corps delayed the anticipated attack. Exercise Crossed Swords 1986 being one of these. 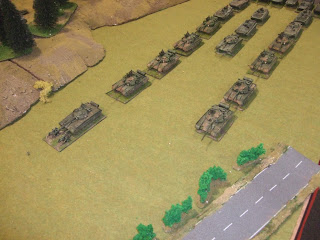 The 2 Soviet forces comprised the following; surviving elements of the Recce Regiment from the 3rd Shock Army, a unit used in previous Gyros Teller games, and an Independent Tank Battalion from the 10th Guards Armoured. The Recce Regiment was equipped with T64BV's with reactive armour and the Independent Tank Battalion was equipped with T80's. BMP's and the usual supporting troops would be used, including a Scud! 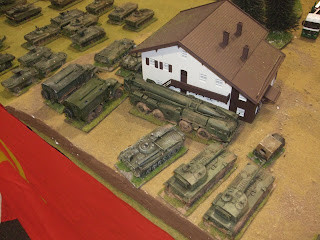 The Belgian forces comprised 7 Leopard I's with 2 Jagdkanone, 2 Scorpions and a Gepard. A local German Reservist unit were supporting the Belgians with 3 M48's and M113's. British forces were 7 Challenger 1's with FV432's and 4 Scorpions and 2 Scimitars. A Blues and Royals battlegroup from 33 Armoured Brigade, supported by the Queens Dragoon Guards -QDG- (using the Scorpions), and Queens Lancashire Regiment -QLR- (providing the infantry component and the Scimitars). 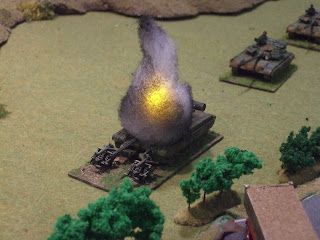 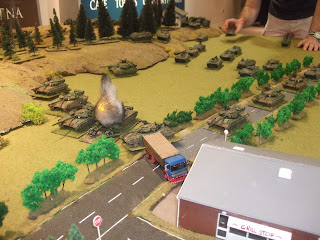 The 2 lines of approach for the Soviet forces, along the roads described above were separated by a hill feature that effectively isolated the 2 advancing columns, meaning they would not be mutually supporting. A corps boundary ran along this feature. The roads would have truck blockades on them to slow any Soviet advance, but they were not insurmountable. Dozer equipped tanks or ARV's would be able to shift them off the road. 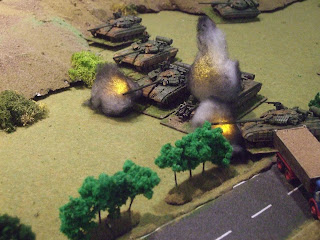 The Belgian forces deployed at the edge of the town, the 2 Jagdkanone's in the centre, with 2 troops of Leopards and the commander deployed to their left and right. The 2 Scorpions were deployed further to the right on the hill to scout forward and report back details. A Gepard provided Anti Air further back in the town. The Belgians did not have any artillery support. 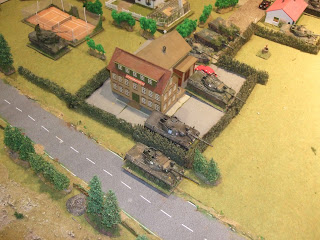 The Germans secured the wooded hill feature alongside the town, which also had the main road going through it, on towards and across the canal. Their tanks were deployed forward, with the infantry setup in the middle of the wood, dug in. They had a light mortar, but no artillery support. They also had a Milan team dug in on the wood edge to interfere with any armour attempting to outflank the wood. 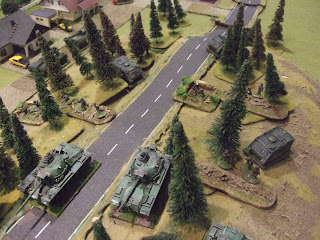 The British were deployed on the table, but in fact if scale was played, were about 20 feet away from the canal. They were replening and refueling, awaiting contact reports and and more detailed information from recce and liaison. The Blues and Royals (Household Cavalry) would deploy via a canal bridge to counterattack the most threatening Soviet advance, or to remove any Soviet presence the other side of the canal. 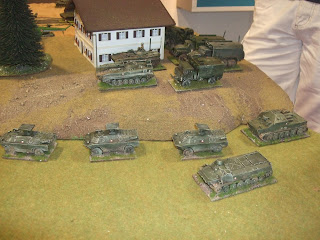 With the game set up, the Belgians and Germans effectively waited till the Soviets were about a kilometre away before opening fire. As usual, the Belgian Leopard's performed dismally, outshone by their Jagdkanone's. The German M48's did little better. However it was enough to halt the head of the columns and force a tactical deployment, and, as the Soviets expected, draw out the defensive lines around the town. 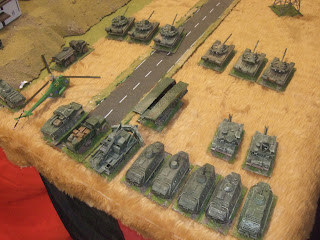 As the Soviets built up their attack for Gyros Teller, the Belgians and Germans attempted to target the Soviets as they deployed out to attack. Whilst they inflicted casualties, they also received casualties back on the Belgians, directly forcing a withdrawal of one troop from the edge of the town back into it. 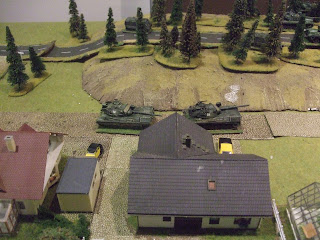 As the recce regiment from 3rd Shock Army deployed out, going round a roadblock, extending over the hill in the centre, and flanking the Belgians on the Soviet left, their Forward Air Controller (TACP) called up 2 Mi24 Hinds to engage the Belgians, the Hinds flying in to attack the remaining Belgian Leopards. 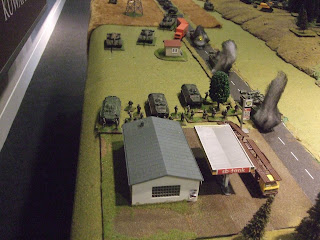 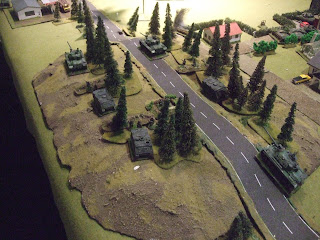 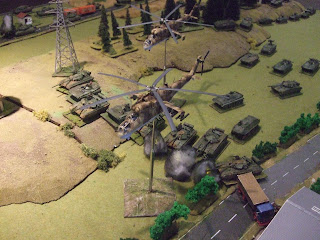 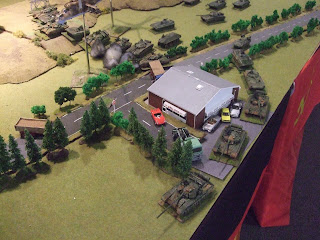 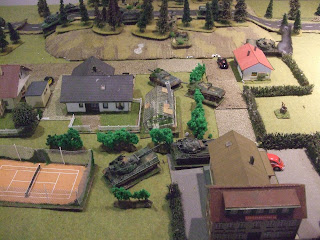 This was too much for the Belgians, who were in danger of losing all their kit, and the remaining Leopards began to withdraw, covered by the Gepard, which did damage to one of the Hinds. With the envelopment of the town forcing back the Belgians, and the poor trade off in terms of armour, the Soviets had basically opened up a route to the canal. 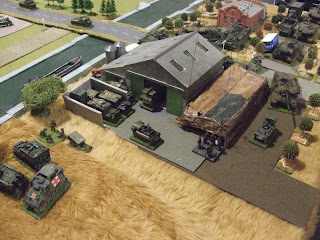 As things were hotting up in the town, CO Blues and Royals sent out two patrols to secure the canal bridges and basically find out what was happening in the process. A troop of Scorpions from the QDG was sent up along the road to make contact with the Belgians. They did not expect to find lead elements of the 3rd Shock Army, or their supporting helicopters swarming around the town. 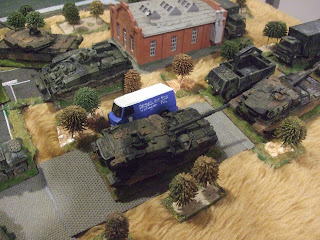 On the other route over the canal, the 10th Guards Armoured's Independent Tank Battalion was forced to deploy out some of its leading infantry to go into the wood on foot, to engage the Germans. Tank support in that area was difficult, and they had 2 options available to them. Primarily, a barrage from a BM21 rocket battery, and a ground attack Su25, to help neutralise opposition from that area. 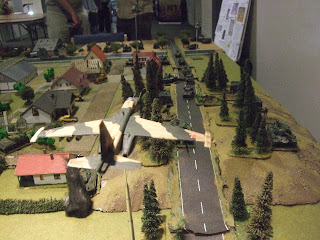 The Su25 flew up the road, over the wood, and successfully spotted the German positions in the wood - dug in infantry, M113's and M48's. 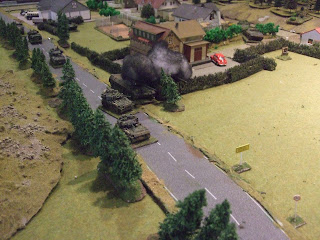 As luck would have it, CO of the Blues and Royals had earlier decided to send a platoon of the QLR up the road over the canal to the German positions to find out what was going on, and to place a force on the bridge to secure any British counterattack. The QLR had 2 Scimitars from the QDG escorting them. They would be able to call up mortar support. 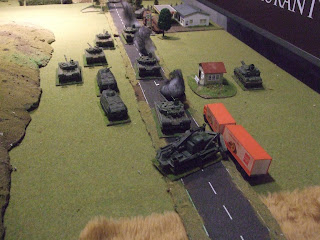 As the leading Scimitars drove up to the German positions, the Su25 then observed the QLR FV432's, as it began to circle and come in for its attack run. Further Soviet forces were deployed onto the table, as their ARV's cleared the road of wrecks and roadblocks. Things were about to get extremely personal for the German Reservists. 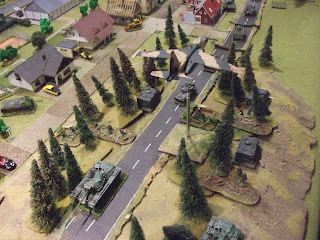 And that was that. An extremely enjoyable game, with a few dice roles. A big thankyou to Richard and his colleagues from Battlegroup South. Firstly for the invite. and secondly for a prize  for the game and the 3 of us directing it - Nick T, Spike and myself. 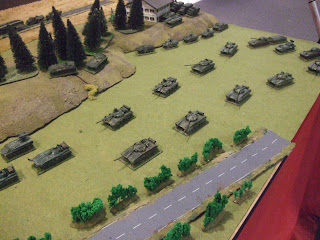 We met an awful lot of people that we were able to talk to about the game. We had questions about the models and the rules we were using. I will be doing a post about the models. The rules were modified Battlegroup Kursk, and I will put up a full posting of our 'unofficial' modifications. A post of the background information to the game will also be made. 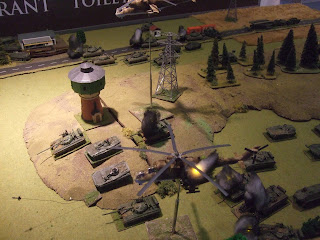 I hope we entertained and didn't bore people. Some of them had even read this blog. Cheers and thankyou.

Posted by Corporal Schmitt at 05:27